MODs, extensions and styles are what immediately come to mind when thinking of the phpBB.com customisation database, but there are other types of customisations too.

This part of phpBB Numerology takes a look at every type of customisation.

Overview of all customisation downloads: 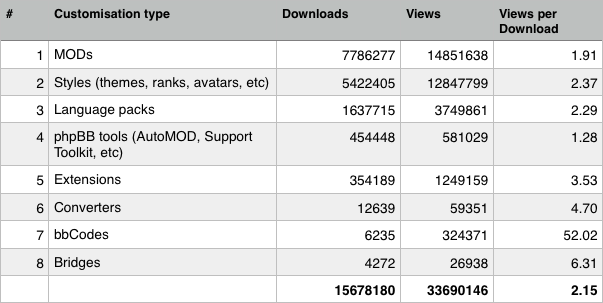 There are some obvious anomalies in the data (like the Viewtopic Birthday MOD) which haven’t been removed from this raw analysis. With that said, this data still gives a fairly accurate representation of how people use the customisation database.

The first figure that sticks out in this table is the the 52.02 views per download for bbCode. This is disingenuous. Taking the fairly popular bbCode “Open URL in new window” as an example, it’s had 8026 views and 0 downloads. Why is this? Because there is nothing to download – the instructions are on the main contribution page: https://www.phpbb.com/customise/db/bbcode/open_url_in_new_window/

MODs, due to their prevalence in the phpBB2 and phpBB 3.0 era, are still the undisputed king of the customisation database and will take some catching up. Styles may catch up in the medium term though, as it’s a forever expanding customisation type in phpBB 3.1.

It’s not surprising to see phpBB tools well represented on the list. AutoMOD and UMIL alone represented 208757 and 151820 downloads respectively – very popular tools. Converters and Bridges round out the top 8, being quite niche categories.

As noted earlier, the figures may be a little high due to anomalies but after taking into account off-site downloads through development topics and the like the numbers may actually be conservative. It’s therefore very pleasing for everyone involved in the phpBB community, and something to be very proud of, that phpBB customisations have exceed 15 million downloads.

For the fifth and final part of phpBB Numerology we’ll go back to where it all started – extensions – and take a closer look at the categories of extensions that are most popular.

The third part of this series has a look the most popular language packs. 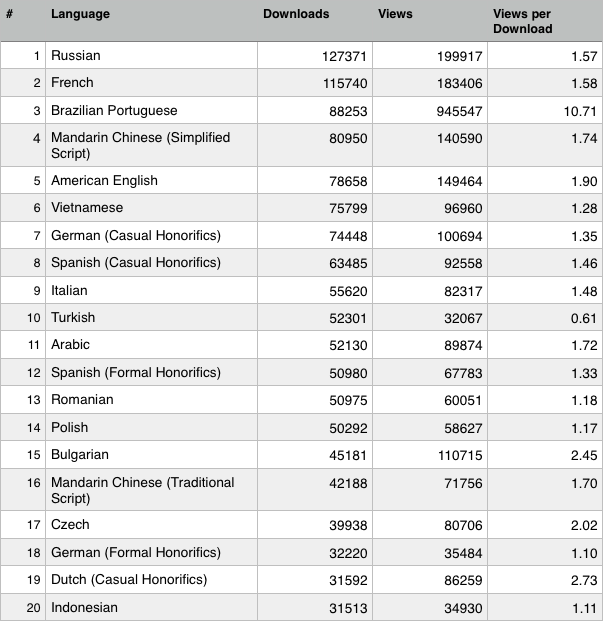 The most interesting observation, bar an anomaly with Brazilian Portuguese, is that the number of downloads corresponds quite closely with the number of total pageviews. This implies that when people download language packs, they know in advance what they want and there is little hesitation in following through to actually download it.

That European languages dominate the top positions in the list is not surprising either. It is evident from the make up of phpBB.com’s own community that phpBB is very popular in Europe.

In part four of phpBB Numerology, we’ll look at some of the lesser known customisations.