Posted by battye in Extensions, Modifications with the tags Extensions, MODs, statistics on November 2nd, 2016

For the second blog post in this series I thought it would be interesting to do a direct comparison with the data presented in the 2011 post. 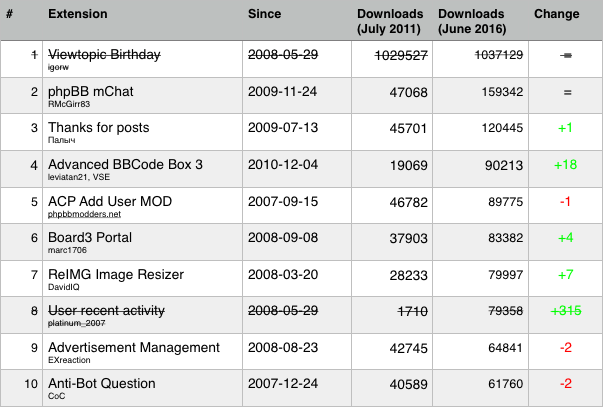 There are a few figures which are unrealistic, which have been struck out accordingly. For example, “User recent activity” apparently has nearly 80,000 downloads while its customisation page has only had 5300 page views.

The most significant movers and shakers were the Advanced BBCode Box 3 MOD, which had a huge spike in downloads in moved up 18 positions from 2011. The ReIMG Image Resizer also experienced a spike, but due to its favourable position in 2011 only moved up 7 places. None of the top 10 from 2011 experienced large drops.

Most downloaded MOD/extension authors (primary authors for phpBB2 and phpBB3): 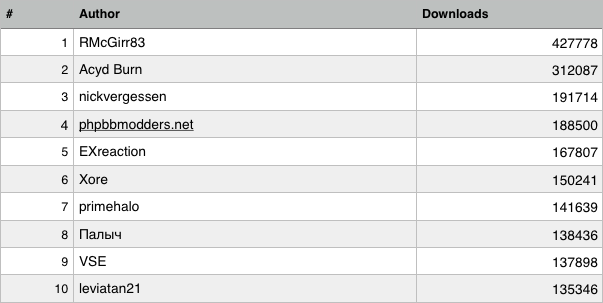 Due to the overwhelming successes of the Attachment MOD and Cash MOD for phpBB2, both Acyd Burn and Xore remain among the most downloaded phpBB MOD/extension authors of all time.

nickvergessen is the third most downloaded author of all time, despite not having any entries in the top 10 downloads for an individual customisation. This is because two of his submissions are/were highly popular and fall just outside the top 10 of their respective lists; phpBB Gallery for 3.1.x has 57,070 downloads while NV advanced last topic titles for 3.0.x has 49,372 downloads.

In part three of this series, we’ll look at the most downloaded language packs for phpBB which will also offer some insights into which regions phpBB is most popular.