Posted by MichaelC in Events on November 11th, 2012

This morning, after a night of coding (with some team members still having their laptops open at 4am), 18 developers descended upon the venue for yet another day of excessive productivity. After breakfast, we met up to discuss the day’s plans and broke down into groups to work on the various projects (see below). Lunch was a feast of Domino’s pizza, seasoned with shared stories of lands afar. We then continued work until the evening’s progress-meet, rounding off the work day.

We enjoyed dinner and drinks at a local restaurant/bar (photos below) and returned to the hotel for some social evening activities. Unfortunately, the hotel elevator entrapped half of our party for a while; thankfully, the wifi still worked, leading to people halfway around the world becoming aware of the situation prior to the hotel staff.

During the course of the day, many phpBB projects and tasks were completed, some of which include: 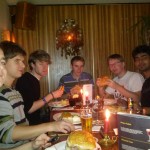 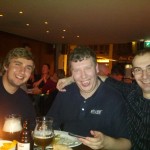 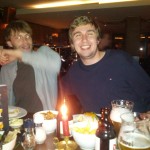 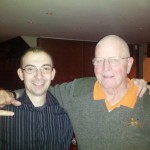 Posted by stevemaury in Events on November 10th, 2012

Appsterdam got off to a great start this morning as 17 team and community members met in Amsterdam to work on features and bug fixes for present and future versions of phpBB, the phpBB website, the Modifications and Styles databases, and systems for providing easier and more accessible ways for community involvement in the development process.
Some of the first day’s accomplishments were:

1.  Validation of many pending MODs and styles;
2.  Improvements to AutoMOD;
3.  Updated nearly 150 pending tracker tickets;
4.  Designed better functionality, navigation and layout for an improved Documentation system;
5.  Modernized the phpBB website;
6.  Development of a new notification system for PMs, subscriptions, new posts, etc. for version 3.1;
7.  Expansion and debugging of the search system for 3.1, which will also support Sphinx and Postgres backends;
8.  Worked on creation of a new “Idea Centre” for easier proposal of features and changes to phpBB by all members of the Community.
9.  Updating of a soft delete pull-request;
10. Revised existing documentation for version 3.1.
Contributing to these accomplishments were Arty, bantu, callumacrae, DavidIQ, Derky, Dhruv, EXreaction, igorw, Marc, Marshalrusty, MichaelC, naderman, nickvergessen, Paul, Raimon, stevemaury and tumba25.